Byron B. Greene is the Associate Director at Kids Elite Sports.  Byron, commonly known as “Coach B” is currently a Science Educator, Department Chair and STEM Fair Coordinator at Imagine Andrews Public Charter School. He is also the Program Director of Shepherd Elementary School Star Achievers Before/Aftercare Organization.  During the day, Coach B spends his time educating our youth in next generation science.  He is also passionate about improving scholars analytical skills through chess.  By evenings and weekends, he can be found mentoring young people on the art and science of baseball as the Assistant Coach of the Nationals Capitol City Major League.

Prior to becoming the Associate Director, Byron was the Vice President/Managing Partner of the Carolina Kitchen Bar & Grill.  In this role, he led a team overseeing the management of accounts and vendor retention with the ability to design profit and loss projections.  He also identified customer needs and delivered outstanding service, in addition to facilitating superior interpersonal and communication skills.  One statement to summarize his character: “A big believer in teamwork!” Byron truly supports all aspects of working together.   From the highest paid staff member to the new hire still within a probationary period, it is imperative that each staff member realizes that they cannot be successful without the assistance of his fellow teammate.  This philosophy is communicated by Byron on a daily basis to inspire a unified workforce.

Byron is a graduate of Morgan State University.  There he received a Bachelor of Science in Biology and played Division I Tennis.  Byron also received a Master’s of Science degree in Biochemistry from Howard University. In his spare time, he serves on several ministries at the Community of Hope, where he enjoys sharing the love of his Lord and Savior Jesus Christ.  Byron’s plethora of diversity from passionately working with children, to training and development makes him a great asset to the Kids Elite team! 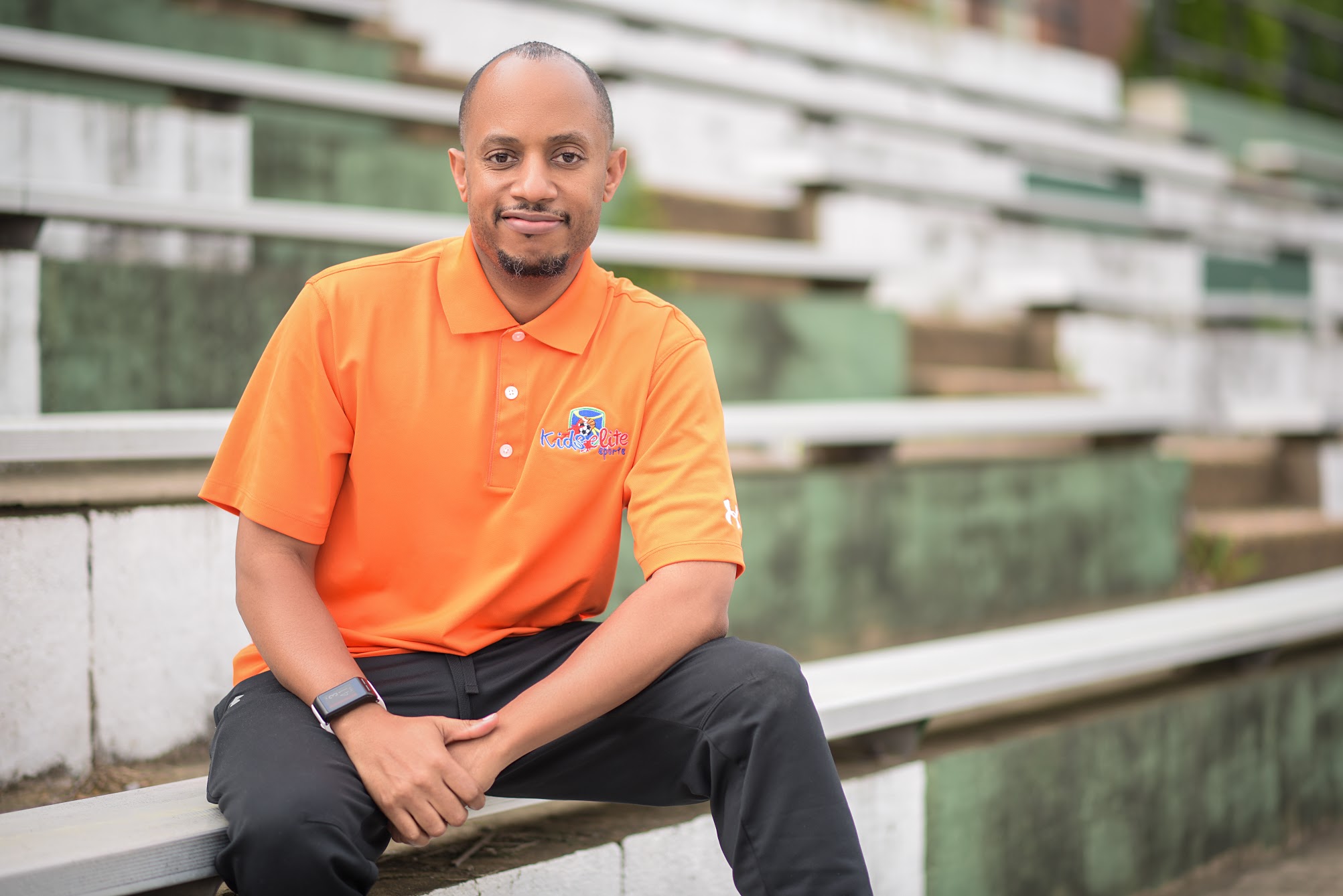 Jami D.H. Dunham serves as the Managing Director for Kids Elite Sports, Inc.  She earned a Bachelor of Arts degree from Howard University in 2000, majoring in English and French, with a minor in Elementary Education, while also competing as a Division 1 athlete on the HU women’s soccer team.  Jami began her teaching career in the DC Public Schools system, spending four years at Truesdell Elementary in Northwest, DC.  During her first teaching year, Jami was awarded the “First Class Award,” an award given to one rookie teacher a year in recognition of exemplary work in the classroom.  At Truesdell, Jami taught fifth and sixth grades in both a self-contained and departmentalized setting, and also served as a grade level chair, cheerleading and basketball coach, Washington Teacher’s Union representative, and administrative intern.

In 2004, Jami ventured into the charter community and began teaching at DC Preparatory Academy (DC Prep) as a fifth and sixth grade English and Language Arts teacher.  During her three years at DC Prep, Jami served as a mentor teacher, administrative intern, and assistant principal, while earning her Master of Science degree in Education Administration in 2005 from Trinity University.

In 2007, Jami transitioned to Paul Public Charter School and spent two years serving as the Director of Curriculum, Training, and Instruction.  In 2009, Jami was promoted to Head of School at Paul PCS, providing academic, operational, and strategic leadership for the School, which at that time served middle school students.  Jami began working with the school’s board of trustees to expand the School and successfully led the charge to amend the school’s charter to offer high school grades.  In August 2013, Paul PCS opened Paul International High School with grades 9-10, and continued growing one grade at a time, reaching full capacity (grades 9-12) in school year 2015-2016.  Transitioning to Chief Executive Officer in 2013, Jami managed two schools in the Paul PCS network, Paul Middle School and Paul International High School.  Jami supported the school principals and directors, collaborated with the board of trustees, served as the organizations liaison with external agencies and partners, and focused on marketing and promoting the organization.  During Jami’s tenure at Paul, the organization was ranked as a Tier 1 school by the DC Public Charter School Board for three consecutive years, was recognized by GreatSchools DC, was awarded for special achievement by Friends of Choice of Urban Schools (FOCUS), and outperformed the state and the charter sector average on state assessments for multiple years. Most notably, beginning in 2014, Jami led the School’s $20.5m modernization efforts, which included renovating the existing building and adding a new addition (22k sq. ft) to accommodate the growth of the high school.  Jami successfully led the School through two charter renewal processes and two accreditation renewals during her time as Paul’s leader.  Jami’s ten-year career at Paul culminated in June 2017.  The board of trustees honored Jami and her service by dedicating the School’s gymnasium in her honor, noting her passion for leveraging athletics to impact student achievement.  Jami currently sits on the board of the DC Association of Chartered Public Schools and serves as an education and organizational development consultant.

Outside of her profession as an educator, Jami spent eight years leading a non-profit youth organization (1998-2006), the DC Redwings Youth Organization, of which she was co-founder with her husband, Desmond Dunham.  She served as a coach and member of the board with the DC Redwings.  She and her husband grew the organization from serving fifteen young athletes in its first year, to over one hundred and fifty young athletes within seven years, providing not only athletic coaching, but expanding to offer SAT prep, literacy and math support, and mentoring for girls.  Throughout its lifespan, the DC Redwings serviced over three hundred youth ages 5-18 in the DC Metropolitan Area and claimed numerous youth national championships in cross-country and track and field.  In 2014, Jami and her husband co-founded KidsElite Sports, Inc., which offers quality youth summer sports camps in DC.  Now, after its fourth summer in operation, KidsElite Sports services over 500 youth throughout the summer.  In her spare time, Jami enjoys coaching her children’s basketball teams, reading, spending time with family, and traveling.  Jami resides in Northwest DC with her husband Desmond and two children, Niles (12) and Nia (10). 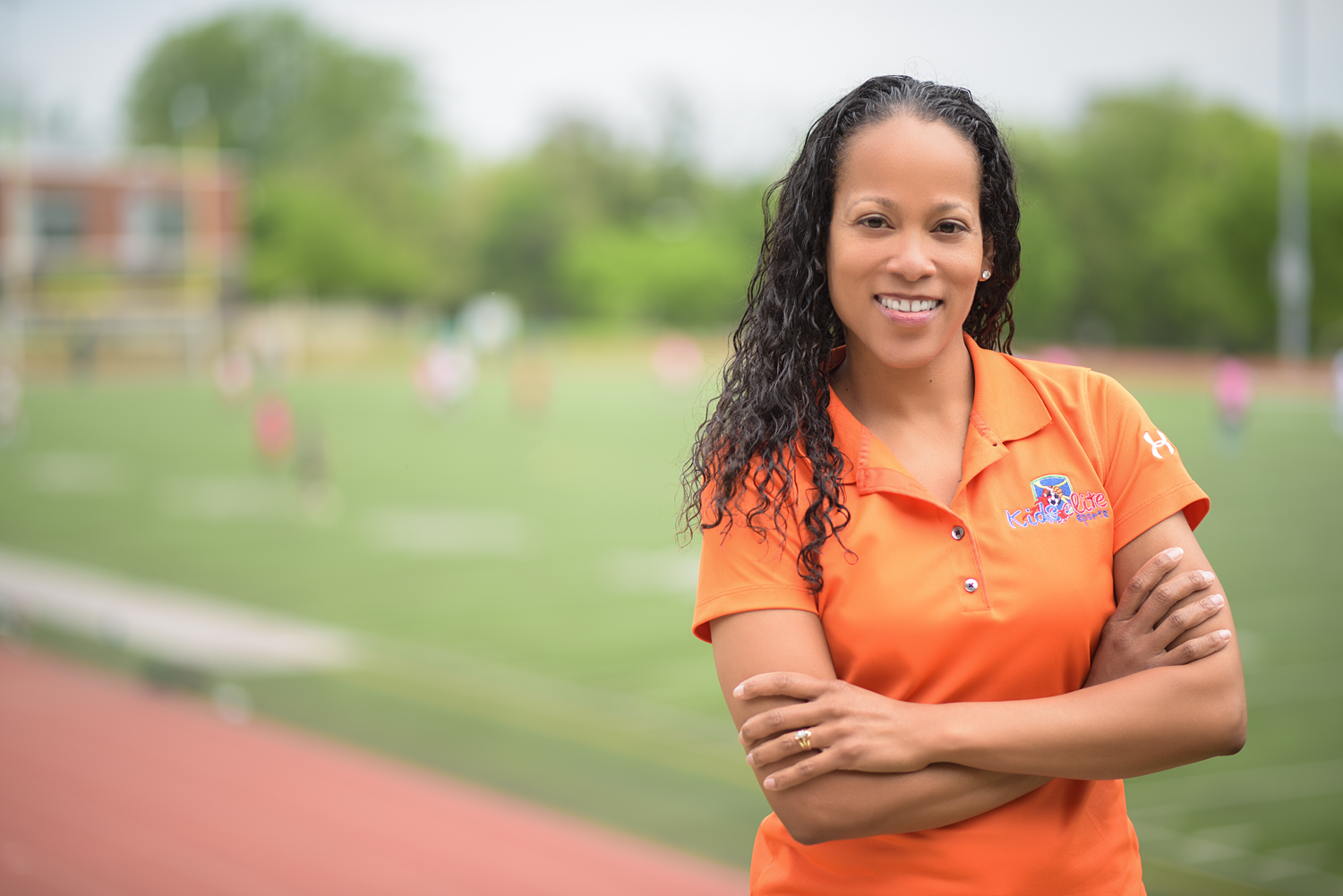 Tia Clemmons (aka, Coach TC) is a Health Educator and Head Track & Field Coach at Woodrow Wilson Senior High School.  In this role, she empowers her students and athletes to become the most successful version of themselves.  Coach TC is a big believer in academics and character.  She stresses that success and winning is a byproduct of all the hard work you put in.  “You’re a student first and you are responsible for your own education.  It is important to strive to be the best person you can be, personify discipline and be dedicated to your own success and your team.”

Coach TC is no stranger to working with inner city youth and the corporate fitness industry.  Having spent the last 13 years as a teacher in the District of Columbia, and a fitness instructor and Fitness Program Manager for Washington Sports Clubs, Inc. prior to a career in teaching.  Recruited as a member of the Track & Field Team on a full athletic scholarship, Tia Clemmons earned a Bachelors of Science Degree in Exercise Physiology with a minor in Sports Administration from Howard University.  She earned her Master’s Degree in Educational Leadership from Trinity Washington University.

Coach TC has fifteen years of coaching experience in Track & Field.  She has coached on a collegiate level prior to coaching 6-18 year-olds with the DC Redwings Youth Organization.  She then moved on to become a force to be reckoned with at Eleanor Roosevelt High School in Greenbelt, Maryland- where her athletes reached national recognition for their abilities in Track & Field.  Coach TC  has also coached nationally and internationally ranked athletes from the 55 meters-800 meters.

In 2015, TC joined the Kids Elite team as a sports specialist, providing developmental and competitive speed & agility training sessions.  She is now a part of the executive leadership team at Kids Elite.

Coach Tia Clemmons takes pride in working to produce well rounded student-athletes who have the option to move up to the next level both athletically and academically and those that can sustain by remaining competitive.  With this mentality, her personal training business, ClemStar, LLC was created.  Aside from coaching Cross Country and Track & Field, Coach TC spends her time developing and training athletes in various sports to compete at all levels.  She continues to do what she loves by preparing young people to compete at the highest levels.  As determined coach, she pushes her athletes to reach their highest ability through rigorous training, learning the values of competition and teamwork. 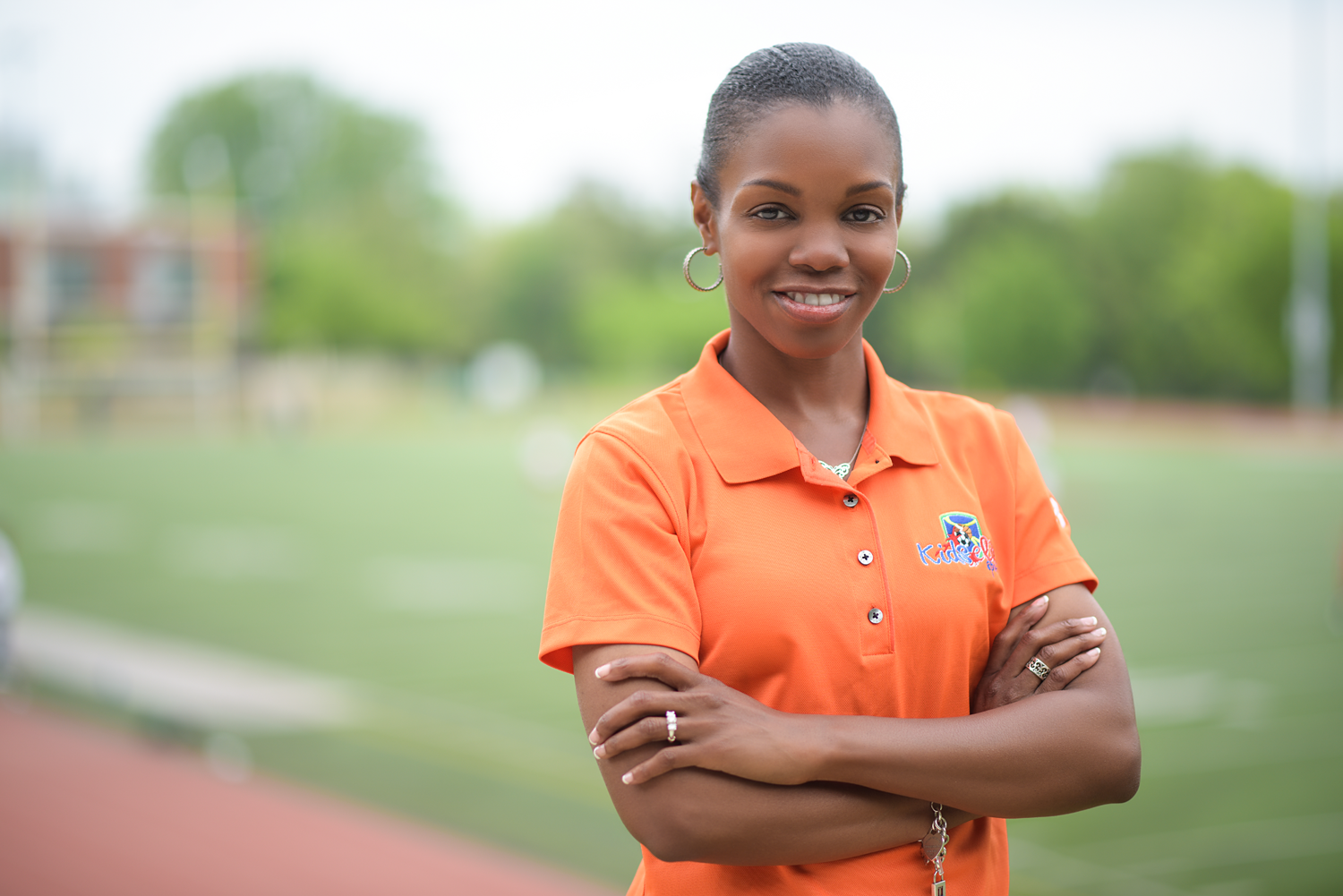 Shawn Bell (aka Coach Bell) has worked with children for well over 15 years. He has been a Sports Specialist at Kids Elite for two years.  He has a variety of experiences including, infant and early childhood care, recreation and parks (Montgomery County), and elementary school after care and sports programming.  Coach Bell has a vast background, knowledge and experience providing quality recreational and sports programming for children in the Washington, D.C. area. He began his career as an assistant preschool teacher and transitioned into after school programs.  His experience includes Wonders Child Care, Lafayette Elementary After School Program and Star Achievers After School Program (Shepherd Elementary).     Additionally, Coach Bell is an NFL flag football certified coach. In addition to his role at Kids Elite, Coach Bell currently coordinates the sports and games recess program and the after school program at Lafayette Elementary School and serves as the Athletic Director for the Star Achievers After School Program. 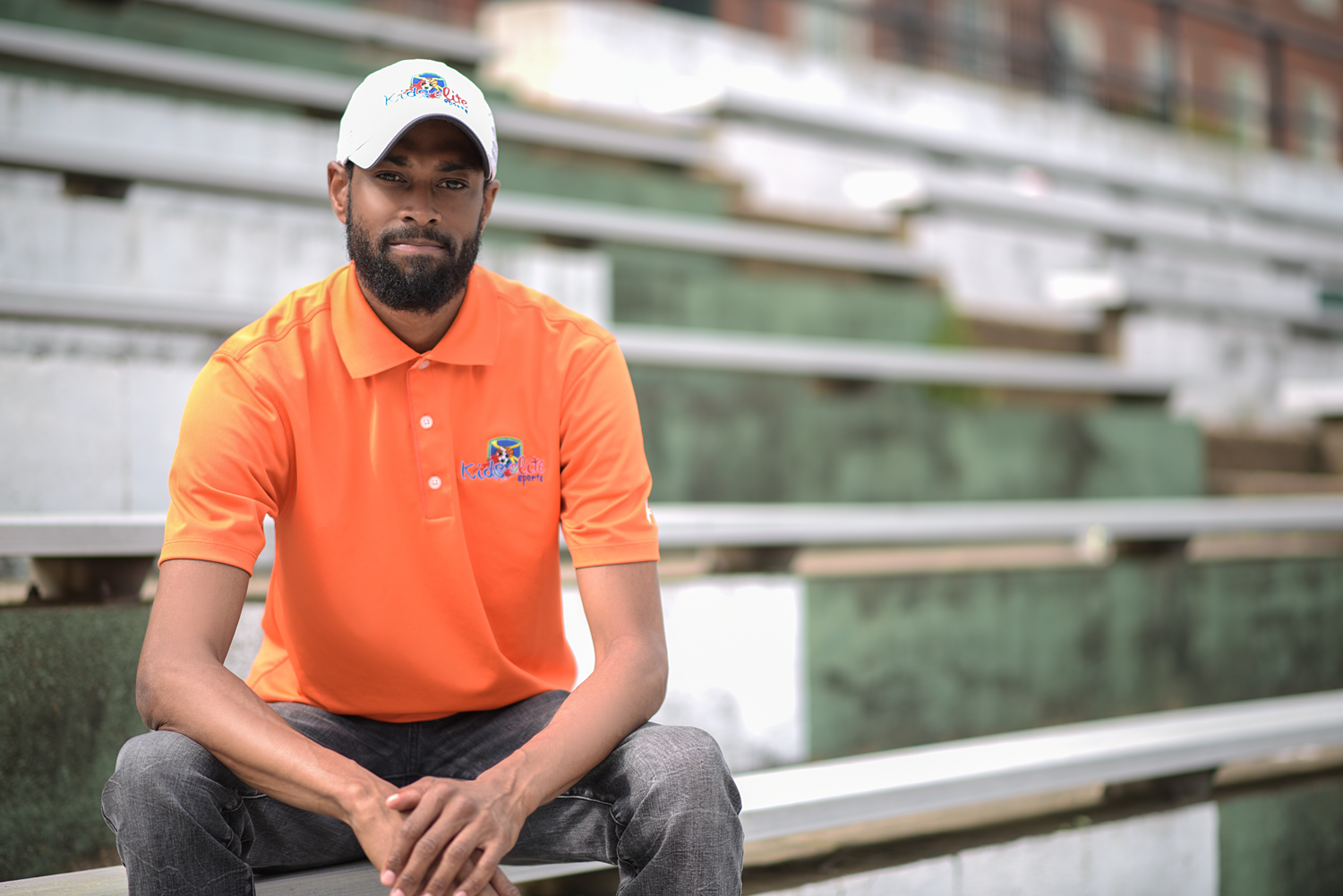