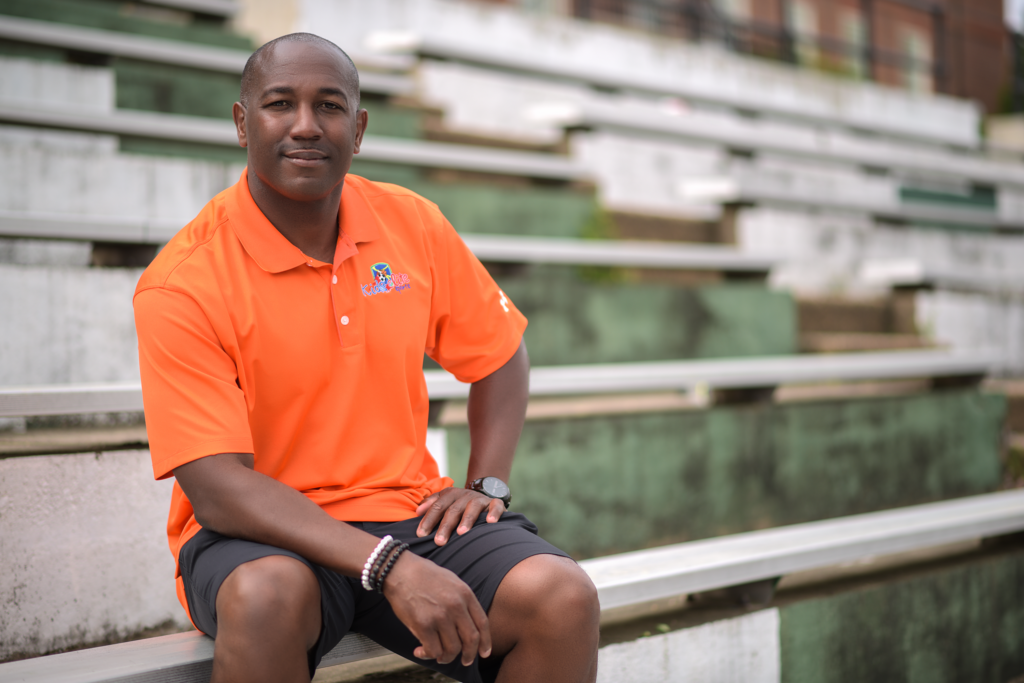 Desmond Dunham is a nationally acclaimed track and field and cross-country coach and local youth sports expert.  He has been a teacher, coach, and community leader in the Washington, DC Metropolitan area for the past two decades.

Dunham initially gained credibility as a coach on the youth running club circuit as the founder and head coach of the DC Redwings Youth Program, producing over 100 Junior Olympic All-Americans in track & field and cross-country (ages 5-18).  Dunham further gained coaching notoriety in 2007 while coaching at Eleanor Roosevelt High School (Greenbelt, MD) by making US history at the Penn Relays, snagging two championship titles in the same meet—the high school girls 4x400 and 4x800—while upsetting the dominant Jamaican teams present that year.  The following year, Dunham was able to bring back a team that captured a repeat title in the 4x400 (with a winning time of 3:37.1), once again making a mark in US and Penn Relay history.  Dunham's resume boasts two girl's high school national records broken in the sprint medley relay and the 4 x 800m relay (with a time of 8:43) during his five-year tenure at the school.  At Eleanor Roosevelt High School, he coached several sub-55 second 400m girls as well as eight sub-2:12 girls including Marika Walker, who anchored the national record-breaking Sprint Medley with a 2:06 split.  Adding to his impressive accomplishments at Eleanor Roosevelt, Dunham captured three (3) Maryland high school girls’ cross-country team championships and qualified two teams to the Nike Team Nationals with an 11th and 8th place finishes respectfully. During the single year that he was the boys’ head coach, Dunham led them to the Maryland Boys’ State Championship title (2012).

In 2014 Dunham was presented with the Brooks Inspiring Coaches National Award for his impact on amateur athletes.   He has coached 17 indoor and outdoor national girl's relay championships ranging from the 4 x 200 to the DMR.   He has coached several sub-55 second high school girls in the 400m throughout his career.

Dunham spread his wings and joined the coaching staff at the University of Maryland as the head cross country coach and distance coach for track and field from 2008-2012.  With limited resources, he was able to produce Maryland University's first woman to claim All-ACC honors in 16 years, who also was the first to qualify for the NCAA Cross Country Nationals in 26 years.  While at Maryland, Dunham also served as the NCAA Women's Mid-Atlantic Cross-Country Regional Chair, leading a committee to determine season rankings and input on meet guidelines.

Dunham most recently concluded a five-year stint as the Head Coach at Woodrow Wilson Senior High School in Washington, DC. During his time at the school, his teams have captured:

Adding to Dunham’s impressive credentials at Wilson, he was also recognized as the 2016 Woodrow Wilson Teacher of the Year.

In July 2017, St. John’s College High School (SJC) in northwest Washington, DC recruited Dunham to lead its running program.  Dunham now serves as the Head Coach and Director of the Track and Field Program.  The SJC has high hopes that Dunham can transform its program into a national caliber powerhouse.

Dunham’s coaching resume is rounded out by his additional accomplishments in the running arena.  He is a Pacers Running consultant and serves as the Pacers Running High School Coordinator, the DCXC Meet Director, and the Pacers Running High School Special Events Coordinator, which includes organizing and leading local coaching education events and coordinating the DCXC Invitational, which attracts over 3,000 high school runners.  In this position, he is also responsible for selecting the All-Run Washington pre- and post-season cross-country high school runners in the DC Metropolitan Area.  Dunham has wide and deep connections to the local and national high school cross-country scene, positioning him to be able to recruit top-level high school runners.

Beyond his remarkable accolades in track and field, Dunham has a wealth of experience coaching and managing youth programs and teams across a variety of sports.  Dunham served as the Executive Director for the DC Redwings Youth Program for eight years.  He spent eleven years as an athletic director and a coach of a variety of sports in DC public and charter schools, coached little league baseball for five years, has coached youth basketball for over a decade, and currently facilitates speed and agility training sessions for a local youth travel soccer team and little league baseball all-star athletes.

Dunham earned his Bachelor of Science degree in Exercise Physiology and enjoyed a successful running career as a Division 1 student-athlete.  After initially studying Nutritional Sciences in graduate school, Dunham earned his Master of Science degree in Education (Secondary Science). He has taught middle and high school sciences, health, and physical education throughout his twenty-year teaching career.  He is also a licensed sports massage therapist and is the owner and founder of Elite Massage, LLC.  He has utilized pre-evet, post-event and maintenance massages to allow athletes to achieve optimal performances.  Dunham was contracted by the University of Maryland Soccer and Lacrosse teams to provide sports massages during multiple seasons.

For the past four years, since founding Kids Elite Sports, Inc., Dunham has worked as the Executive Director, managing the strategic direction and exponential growth of the non-profit.  Dunham has leveraged his coaching, teaching, and leadership experiences to structure an optimal sports program for youngsters, anchored in a philosophy proven by research and approved by parents and kids.  Kids Elite Sports provides high-quality developmental sports, fitness, and enrichment programs which empower children to live healthy and active lifestyles.  Kids Elite seeks to develop well-rounded individuals who will learn and enhance critical motor and athletic skills while building character, determination, perseverance, and collaboration in a nurturing environment.  If you ask our Kids Elite campers, they will tell you “Kids Elite is fun!” and “Coach D is the best!”

Dunham resides in Washington, DC with his wife Jami and two children, Niles (12) and Nia (10).